tl;dr – We’re on Discord, and our public Slack is going away.

For some time, we’ve had a public Slack Team as well as a private, members-only one. In practice this has meant that our public channels have gone fairly underused since members and friends tend to hang out in different spots. We’re consolidating our realtime chatting in a public Discord, now open to anyone:

Please, join us! As always, our Code of Conduct applies just as much to our online spaces as well as physical ones.

We’re looking at giving special Discord roles to Friends of Resistor – you can sign up at https://withfriends.co/nyc_resistor/join. Friends help us keep the space and community running, especially during COVID times where events and classes are particularly challenging.

Our public Slack instance will be archived and then deleted in the next couple of days, so please plan accordingly if you’re hanging out in Slack. 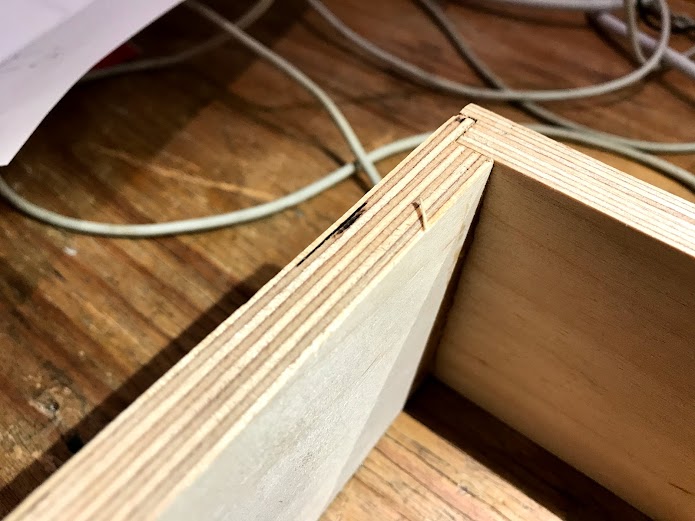 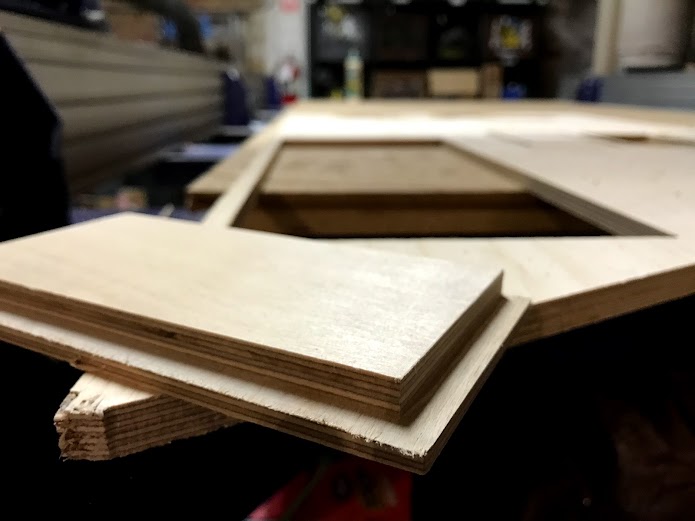 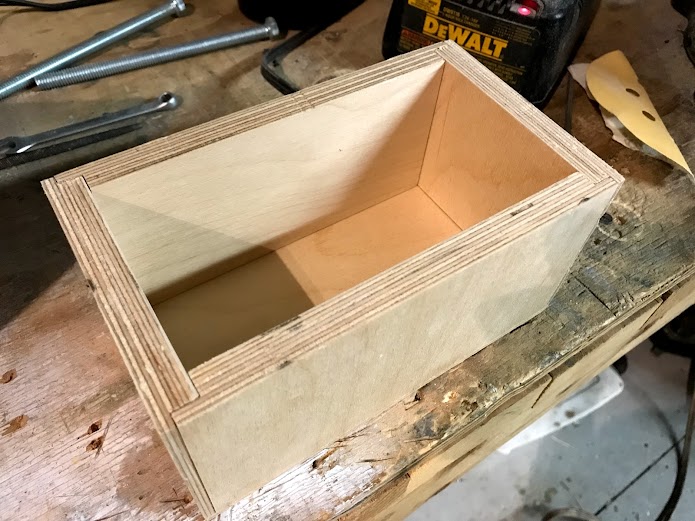 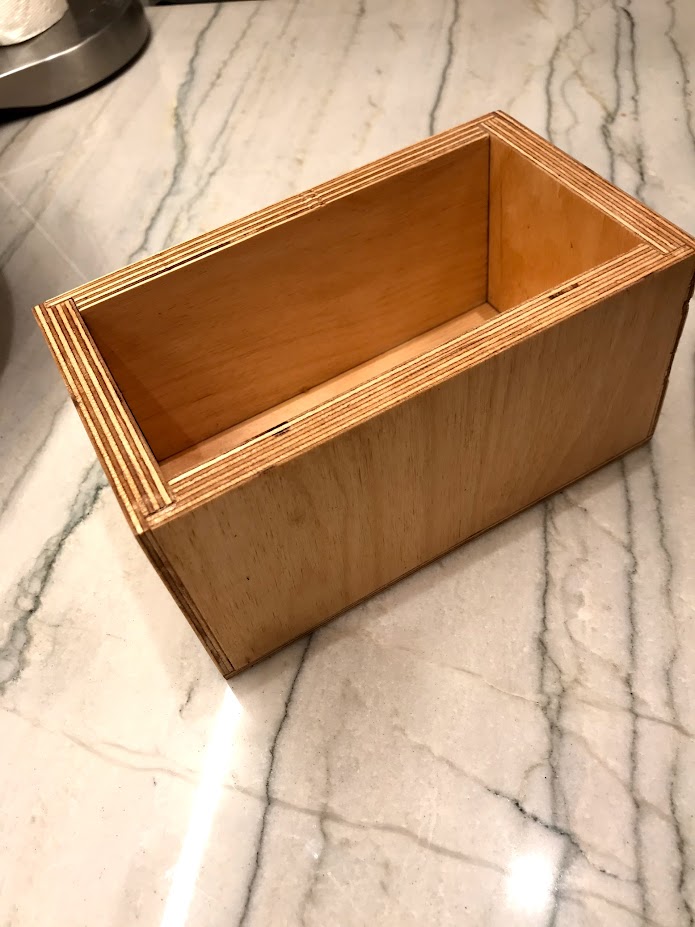 Recently, I moved to a new apartment, and this presented me with a problem. You see, some years ago, my wife and I bought a nightstand when we had space for just one of them. Now, we have space for two, so we needed a second one. Of course, that nightstand has been discontinued for years and years. We could have purchased two new nightstands, but that seemed like a waste. Fortunately, we have a ShopBot and a supply of plywood – so I took it as a challenge to make a nightstand that was as close to the original as possible.

The original nightstand, made by a retailer popular with recent college graduates, that isn’t Ikea.

There were some design requirements from the outset:

END_OF_DOCUMENT_TOKEN_TO_BE_REPLACED 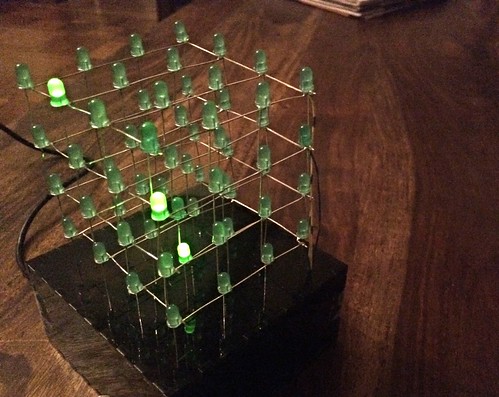 It’s something of a rite of passage for hackers and electronics tinkerers to put together an LED Cube. It’s a great way to build something from a relatively minimal amount of components while building knowledge of diodes and microcontrollers, as well as a test of soldering skill. It’s also something that I’d never done myself, so I set out a few weeks ago to put one together.

I found plenty of illustrated guides online; Instructables has at least two: http://www.instructables.com/id/LED-Cube-4x4x4/ and http://www.instructables.com/id/The-4x4x4-LED-cube-Arduino/ are quite good. Putting the cube itself together was a great challenge and took me a day or two. However, once that was all done I found that the software was a bit of an afterthought (and in some cases left almost entirely as an exercise to the constructor.) So this weekend I spent some time putting together a C library for Arduino (or Arduino-like) microcontrollers for controlling a 4x4x4 LED cube (although it could easily be adapted for different sizes.

You can find the code on GitHub. 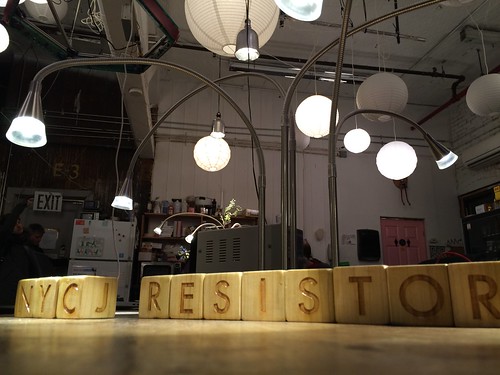 By day, I tell computers what to do. I like to think that I’m okay at doing that. On the weekend, I sometimes make radio things or build off-the-wall electronics projects at Resistor. I’m not quite as okay at that. It’s quite rare, though, that I make something tangible which has no physical function other than its own form. Long ago, I watched my grandfather build things out of wood: tables, benches, once even a dollhouse. Recently, my friends welcomed their son into the world, and as the holidays are approaching I thought a perfect gift would be a set of wooden blocks made by hand. I thought it would be a perfect opportunity to dabble in woodworking and create something completely non-electronic, non-code for a change. END_OF_DOCUMENT_TOKEN_TO_BE_REPLACED

Are you interested in programming and software but have never known where to begin? Some of our most popular classes have been our

introductory programming ones, and I’ll be teaching one this Saturday. The idea is to give students a gentle  introduction to software concepts using Python, a very widely-used but accessible language, and practical examples.

I don’t assume any prior programming experience: I’ll teach you everything you need to know to get started. Come and join us!

We’re often asked if we can host an introductory programming class or two; in fact, our resident Classmaster informs me that a full 19.76% of former students report they’d be “very interested” in programming courses. To that 19.76% of a representative sample size, boy have I got an offer for you!

I’ll be teaching Introduction to Programming and Python on October 6th, right here at NYCR. What will you learn, as a vaunted and privileged member of the 19.76%? The goal is to bring you through the basics of programming using some practical and simple examples, to a point where you can begin to learn independently and take home some working code that you can customize and hack on.

What do you need to bring with you? In the hardware department, you need a laptop with some variant of UNIX, like OS X or Linux. If you’re a Windows user, a virtual machine running Linux will be fine. In the brainware department, I won’t assume any prior programming experience, but I will assume a moderate amount of familiarity with computers in general. You should know your way around your own system and be curious about how things work. This is designed to be a gentle introduction, not a crash-course for the impatient, but I’ll be happy to change the pace of the course as necessary.

Questions? Feel free to get in touch with me at [email protected]