Are you building a giant LED display for your hackerspace or Burning Man and need a way to control multiple kilometers of LED strips? Are you tired of running massive USB hubs of Teensys for each row? Then you might be interested in my LEDscape code for the BeagleBone Black to drive up to 500 meters of WS2811 RGB LED strips at 30fps.

On the Teensy 3, Paul’s OctoWS2811 makes very clever use of three DMA engines to generate the bit-train for the WS2811 LED strips, but only supports up to eight strips. Beth’s FadeCandy improves on Paul’s work and has a great frame rate with beautiful interpolation (and a custom USB protocol to pump pixels fast enough to keep up with the frame rate), but the temporal dithering and expanded colorspace features run into frame rate and memory limitations at strips beyond 64 pixels.

The BeagleBone Black has far more memory than the embedded AVRs (512MB versus 16KB) and the AM335x ARM Cortex-A8 has a killer feature: two built in PRU (“Programmable Realtime Units”). These are embedded real-time microcontrollers built into the ARM core with full DMA to main memory and control over all of the IO pins. This afternoon I hacked up a quick proof of concept in PRU assembly that use one of the units to drive 32 of the WS2811 strips at full speed with zero CPU load and easy double-buffering of the image. The best parts of writing for the ARM instead of the AVR is that there aren’t any issues with running out of memory for image processing and there is built-in ethernet for OSC or other visualization libraries. 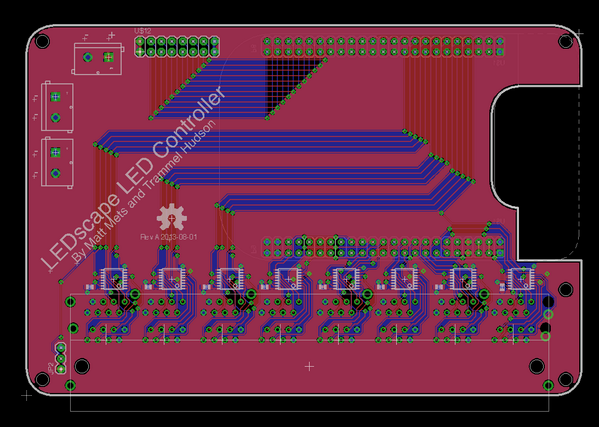 The drawback to the BeagleBone is that the 3.3V signals won’t travel very far for large scale displays. Matt Mets (of Blinkiverse and Blinkitape kickstarter) and I are designing a “cape” to add 32 RS485 drivers to translate them to differential signals for longer runs. Add in art-net support and it will be part of an awesome DMX/VJ system.